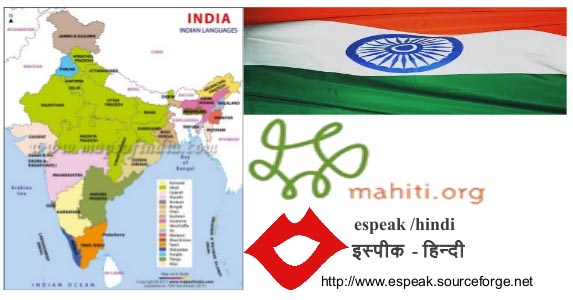 I was proud and anxious, when I got involved in modifying Hindi pronunciation in eSpeak.
I was proud and anxious, when I got involved in modifying Hindi pronunciation in eSpeak. As a member of Mahiti's eSpeak team, I was in a way responsible to work on the nations' national language Hindi, a language that is 5th most spoken language in the world.
I was feeling anxious because I knew Hindi dictionaries were used as the base for all other regional languages we were working on. I was to be at par with the confidence and support provided by CIS (Centre for Internet and Society) in this endevour.
To give you a brief example, I will share a small experience with you. The basic pronunciation of the Hindi alphabets was at an acceptable level, but pronunciation of all the numbers was not in the version we began working upon. The suppressed sound of the ending phoneme for numbers like 11, pronounced as “i.gga.ra'h” with the 'i' was almost  inaudible and a sharp end with 'h' or the number 71, to be pronounced as “ik'hat'ar” where the the 'ha' does not make the preceding “k” sounds like 'kh'. The challenge was to do a trial and error with various combinations of phoneme strings abiding the basic phoneme rules to arrive at the desired pronunciation.
There is stiil a lot to be done. The typical pattern of Hindi pronunciation besides the intonation part, is yet to be achieved near prfection. The specific rule to pronounce a word with chandrabindu, like in “aanch” or saanch” and the difficult differentiation of our three 'ra' brothers – 'ra', 'rra', and 'rha' has to be improved. We can do a little about all of them but yes with eSpeak's own limitation on synthesising programme it could be a tough nut to crack, but we will keep trying, till we actually achieve it.
As we say it in hindi  “Man me hai vihswas, hum honge kamyaab, ekdin” (deep in the heart, we do believe, we shall overcome some day), and that some day is not very far.
Jai Hind.