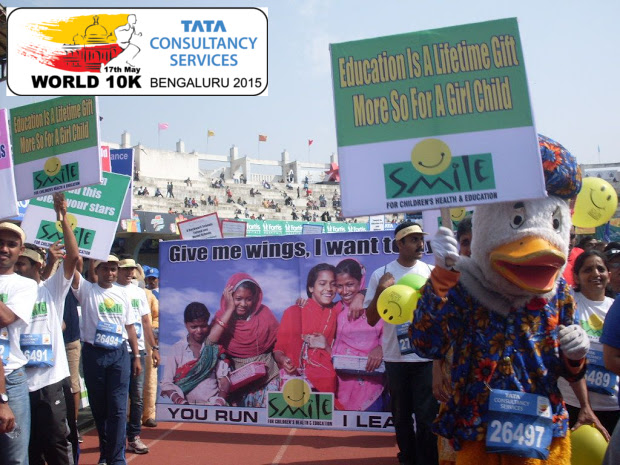 The TCS World 10K is fast gaining popularity as a motivator for healthy living and supporting charity – while Bengaluru has taken well to the 'healthy living' part of the Event over the years, there's much more to be done to get people to support voluntary work.

The Bengaluru TCS World 10K is an annual event certified by AIMS, organised by Procam International that has professional runners from all over the World  participating in what is the highest prized 10km road-running competition in the world – US$160,000. But an important feature of the TCS World 10K is the participation of citizens and a growing culture to improve health and raise money for charity with the likes of Kannada film star Puneeth Rajkumar as the Brand Ambassador. Thousands of Bengalureans now train year-round to participate and excel at the World 10K. In 2014 nearly 25,000 runners participated in the World 10K. However, of these 25,000 runners, only 328 raised money for charity.

Running for Charity
The Bengaluru World 10K has raised Rs 16 Crores for over 250 voluntary organisations since its inception in 2008. In 2014, the event raised Rs 4.04 Crores, of which, Rs 1 Crore was contributed by Companies and Rs 50-60 lakhs through voluntary organisation's own network of donors. The remaining Rs 2.5 Crores was contributed by the the money raised by 328 runners of the 25,000 that registered. The total amount has directly benefitted more than 15,000 underprivileged children and adults through causes varying from Education and Health to Disability and Human Rights.
The event is the single largest fundraising opportunity for NGOs in South India. However, given the numbers, only 1.4% of the participants actually raised money. Delhi and Mumbai too have these annual running events – the Delhi Half Marathon had 35,000 runners of which 120+ raised money and the Mumbai Marathon had 40,000 runners with 640+ runners raising money for charity in 2014.
While a comparison with similiar running events abroad maybe unfair (since most of the major runs have a legacy of several decades – the Boston Marathon, over a 100 years!), these running events have become synonymous for being Fundraiser events. Most runners are active fundraisers for the voluntary organisations listed in the Event – with a general expectation of more than 80% of registered runners, raising for charity. Most entries for Runners are through a Charity Organisation where the Runner is expected to fundraise for the organisation in order to take part in the Run. The Boston Marathon raised a record $38.4 million for charity in 2014, a near double of the $20 million raised in 2013.
In the Mumbai Marathon there were 5000 charity bibs that are given out to interested runners by NGOs who would find people that can raise a contribution for the NGO. This could very well be the beginning of what we are seeing in the major runs abroad.
So, where's the gap?
Why are so few Bangaloreans running for charity? Meena Dave, CEO of India Cares Foundation, the Charity Partner for the Bengaluru TCS World 10K and the Airtel Delhi Half-Marathon says that many runners do not know that they could opt to run for charity. “The focus of the Run is to have fun and to promote healthy living. Runners are not particularly aware about running for charity. However, there has been an increase in awareness of the several local NGOs that register for the Run.” Several NGOs taking part in the Run have volunteers that walk with placards raising awareness about their cause or wear costumes that bring visibility to the cause.
In fundraising, one of the main concerns for individuals to give, is credibility – where does all the money go, how is it used. To address this question, India Cares Foundation are running a social media campaign called #didyouknow that highlights how each NGO has spent funds raised the previous year. Meena Dave says that this aims to ensure that “all runners that had raised money the previous year, continue to do so”.
Volume increase maadi please!
“We need more visibility about running for charity – but that's not an easy task,” says Meena. India Cares is open to any and all avenues that can talk about and give visibility to the impact that running for charity can make on the voluntary sector. “To bring visibility to running for charity will raise the amount of contributions to NGOs thus completely opening up the fundraising opportunity that events like this truly are. If more than 15,000 people lives can be directly benefitted from contributions of less than 2% of the people taking part, imagine what an 80% participation can do! We would certainly like people to come forward and help us spread the word.”
We at Mahiti are the technology partners for India Cares Foundation and help them maintain their web portal that makes it easy for individuals to create fundraising pages and share with friends and family to raise money for a cause. In 2014 the site saw 1200 donations for the World 10K event and nearly 40 lakhs in online donations. Let's just say we would like a bit of a challenge too ;)
So if you're running, you should be fundraising too! The TCS World 10K 2015 run takes place on 17 May. 96 NGO's have registered so far. To learn more and register visit http://www.icfn.in/tcsworld10k/